Thanksgiving is just two days away, and if you’re smart, you’re already prepared for it: you’ve got a turkey in the fridge, the ingredients in the cupboard, and the invitations all sent out. Or maybe you’re like me instead, and have found yourself up against the wire to throw a last minute Turkey Day feast. Either way, your iPhone and iPad can make putting on a holiday dinner much easier than the Pilgrims used to do it.

Find A Good Cooking App And Nail Down Your Recipes 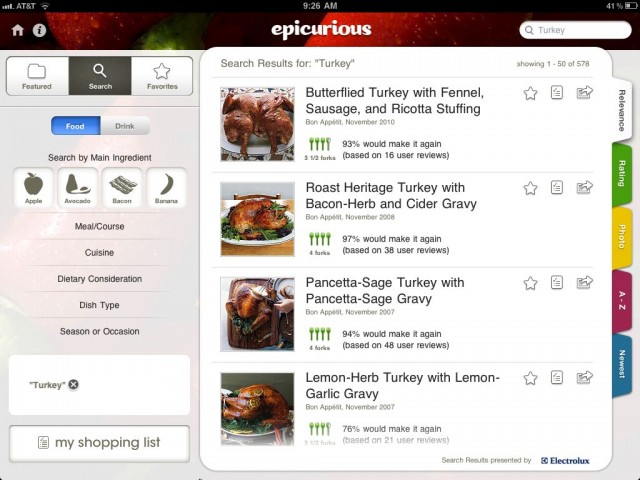 The biggest ordeal of Thanksgiving is going to be getting all the food prepared, and the first step to doing that is finding a cooking app you like. The Lifestyle section of the App Store is filled with thousands of cooking apps, but personally, we really like Epicurious.

Not only is the app itself incredibly slick, but it ties into Epicurious.com‘s online repository of millions of recipes. To put it in perspective, there are over 578 recipes for turkey, and even 105 recipes for pecan pie. Just pick the one that looks most delicious.

Once you’ve used Epicurious to find your recipes, you can use the app to easily add all the necessary ingredients to a shopping list. If you want something more self-contained, though, you can also try the Chow Thanksgiving Dinner Coach.

Get The Best Deal On Your Groceries With A Coupon App

When it’s time to actually buy your groceries, we’ve got two pieces of advice: get to the grocery store as soon as it opens in the morning to beat the rush (I live across from a grocery store, so trust me on this), and bring a good couponing app on your iPhone to get big savings.

There are a lot of different options, and it’s possible your grocery store of choice even has its own app. However, as an all-around solution, I really like PushPins. Not only is the app itself gorgeous, with support for digital shopping lists, shopping history and even nutritional information on millions of items, but it integrated with the store savings cards of many supermarket chains like Foodtown, Giant Eagle, Harps, Lowes Foods, MainStreet Market, Marsh, Shop ‘n Save and ShopRite. Just clip digital coupons using the app and automatically have them passed on to your in-store card for instant savings. 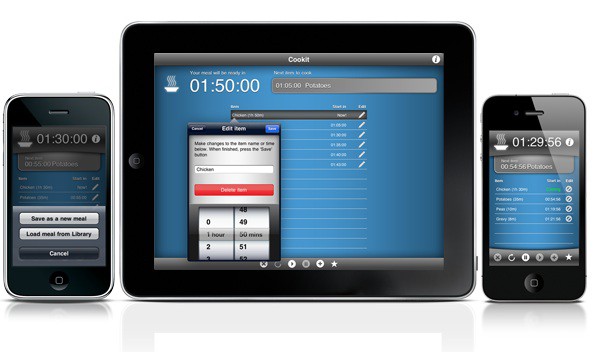 If you’re cooking every dish for Thanksgiving, you’re going to have a lot of balls in the air (and dishes in the oven) at the same time. The thing you’ll be juggling most is time, though. Time in the oven. Time on the stove. Time chilled. Time until basting. And so on. Let’s face it. You need some help.

But what if you don’t have Siri, because you’re on an older iPhone or iPad? We find CookIt to be our preferred kitchen timer app. Not only does CookIt tell you when to take things out of the oven, it’ll even tell you when you should start all of your dishes to make sure they are done at the same time. Not bad functionality for just $0.99.

Keep Your iPad Clean, Out Of The Way And Upright During Cooking 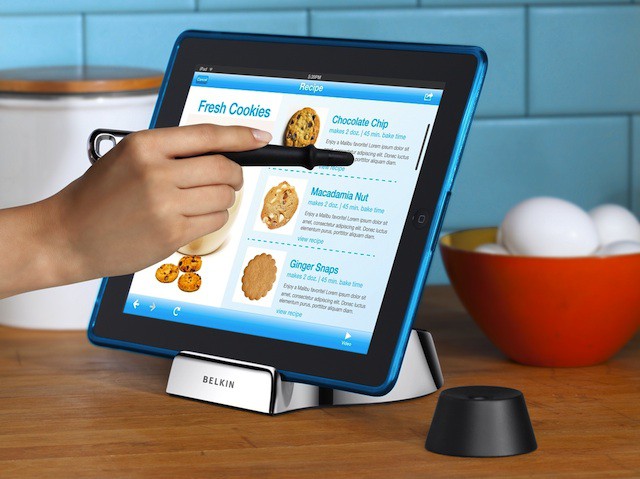 Well, you could always buy yourself a stand. We like the Belkin Chef Stand, which helps keep your iPad upright and mess-free during prep work, but why spend $40 on a stand when you could get a perfectly functional stand for just $0.69 instead?

Yup, that’s right. A $0.69 business card holder from Staples works great as a makeshift iPad stand. And hey, if you don’t like that? You can always do what I do and use your Smart Cover to hang your iPad directly on the fridge (it works really well!).

Either way, you’re probably going to get your screen dirty if you’re not careful. If you are a stickler for maintaining a grease-free iPad, try picking up A GreatShield EZseal. It works wonders.

Finally, Make Sure You Have A Great Camera… Or The Right App 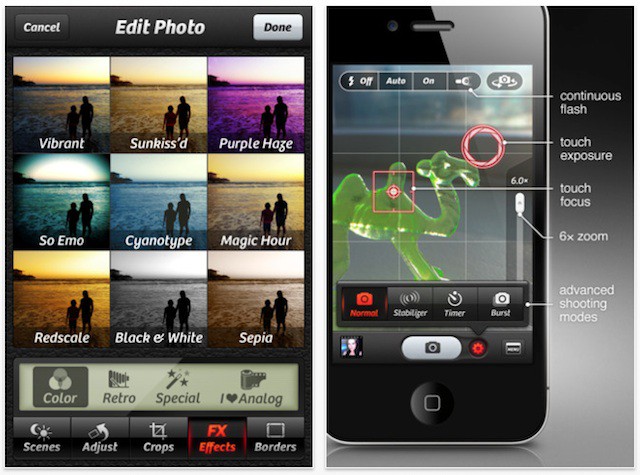 Once all of the food is done, it’s time to document your holiday.

The best gear for the job is probably a DSLR, but if you don’t have one, the iPhone 4S has one of the nicest camera chips around, and results in beautiful stills and video at least as good as that of most pocket digicams.

For a little extra oomph, though, especially if you don’t have a 4S, why not try a third-party camera app. Our favorite is Camea+, an incredible photography app that can stablize photos, help you align them better, give you an enhances digital zoom, turn on your iPhone’s LED for continuous lighting and even adjust the camera’s settings dynamically for the perfect shot according to the type of scene you’re in.

Of course, there are lots of other options, like Instagram, so use the app you like most. Just make sure to take pictures of all the food you cooked before it gets eaten: food photography is just one of the best ancillary joys of cooking, and what better way to let your turkey live forever, long past the happy day when it was decapitated, gutted and consumed?

Do you have any app or accessory suggestions for making it through Thanksgiving in one piece? Let us know in the comments below.