Naughty LOADED Dice is a sex dice game, one of the “foreplay” apps that nudged past Apple censors (see our round-up here). There are half a dozen similar sex games available on iTunes, but Naughty LOADED Dice may be the only one to exploit iPhone technology for sexual content — allowing users to secretly control the roll of the dice.

The game (whose title excludes the word “loaded” after download) has a secret menu that allows him or her to select their preferred combination. When playtime comes, the user can play normally with his partner, or press a secret hidden “button” to activate a fixed roll of the dice. The ruse makes use of the iPhone touchscreen, which allows developers to create buttons on screen that are invisible.
Despite rumors that Apple censors would nix the app — in part for its menu trickery — it was approved for sale in the iTunes store July 3.

Cult of Mac spoke to James Miller, Director of Marketing for Trichotomy Media, about the murky process of getting the app approved, Apple’s ambiguous stance on promo codes for +17 apps and why his company’s next apps won’t be for adult audiences.

CoM: What was your experience in getting your app approved?
JM: Getting Naughty LOADED Dice approved wasn’t the trial by fire that it seems other apps with “racy” material had, but it sure seemed to have something fishy to it. I read that other developers who submit apps with very simple functionality get their apps approved in a few business days, a week at most.

Ours has very simple, self-contained functionality and it took more than a month (to get approval). I had already talked to my PR contacts about how we submitted our application, expecting it either to have taken only a week or just get rejected outright for the content.

Full interview and pic of the app’s secret screenÂ  after the jump.

JM: (cont’d) I went back to my PR contacts to warn them about the delay, which has been coined “pocket rejection.” Pocket rejection is when Apple chooses to ignore an app submission rather than deal with the issues it may cause.

I’m sure the idea of secret menus utilizing iPhone technology to trick users was something they had to think about before accepting.

CoM: Do you think the +17 warning helps or hurts sales?

JM: I’m really not sure what to think about the 17+ rating yet.

In our case there wasn’t much to debate about, as the content of our app isn’t something we would try to market to a younger audience. The parental control and rating system as a whole is a great idea, I think it will actually allow racier material to get into the app store…within the judgment of the App censors.

The words we use in our Naughty LOADED Dice app are on the level of a PG-13 movie. And mind you, we just display words — there are no images of any kind like a movie might have. I guess I can see it both ways — the interactivity of the app can make mild sexually suggestive content that more obscene and we don’t want to encourage children to engage in sexual activity.

A few of our competitors have their apps rated at 9+ and 12+, which I think is fairly irresponsible. I think if there were a 15+ rating, we would all belong there. 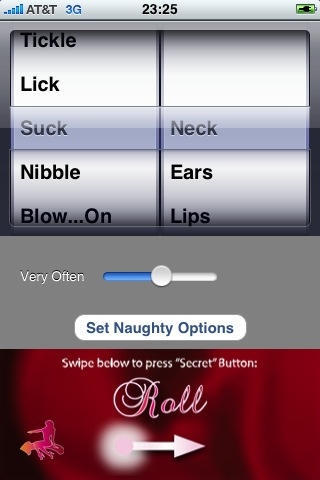 The app lets players cheat by loading the dice with a secret menu.

CoM: You mentioned Apple offers no promo codes for +17 apps — is this something Apple stated outright?

JM: We indeed cannot issue promo codes for 17+ apps. iLounge reported a while ago that Apple has described the situation a “minor glitch.” That report was so long ago and the glitch has not been fixed, so I don’t know if I completely believe the official statement.

CoM: How has it affected sales/buzz?

JM: No promo codes has definitely had a huge impact on our sales.

It’s very hard to get the attention of the blogs, but many of them will review your app if you submit a promo code. Without the codes to make it free, I understandably haven’t found any journalist willing to pay to review it.

If stopping the App Store from having huge sales on adult-oriented apps is what Apple intended by not giving us promo codes, they are doing a great job.

JM: I’m glad Apple seems to recognize the distinction between apps that have suggestive words and ones that have explicit imagery.

Our company has no interest in pornography, obscenity, etc., so I can’t say I can sympathize with the developers of apps that use nude imagery. Apple doesn’t want their App Store to become a smut “gold rush” like the Internet became in the mid-90s, but at the same time their rating system implies a tolerance for nudity.

I would be happy with Apple’s censors if they had consistent standards and communicated them well to developers so they know what is OK and what isn’t. Having a rating system that has an option for frequent and intense nudity but then rejecting apps with any nudity just doesn’t make any sense.

CoM: You mentioned upcoming apps (ndr: include “Just Say It” — a phrasebook for socially-awkward situations — and “Premonition,” a kind of digital crystal ball) won’t be targeted to the adult market.

Did your experience with Naughty Dice influence that?

JM: It was definitely part of our decision making. We wanted to test the waters of controversial ideas with Naughty LOADED Dice (and trust me, we do realize its a controversial idea). I know that controversy sells, but not when controversial apps are not allowed promo codes! This “minor glitch” is something that devs (including us) have complained to apple about with no response.

We want to continue improving Naughty LOADED Dice with version updates (v.1.1 is already nearing completion), but if Apple puts so many hurdles in our way towards being successful and selling a respectable number of units, then it may not make economic sense to keep developing for it when we have other apps in our pipeline.

CoM: Where do you think the app market is heading?

JM: I look forward to the new APIs and the new hardware of the 3GS. The improved camera and the integrated compass just has so many possibilities that I know will show up in the app store.