The man behind the popular iA Writer app, Oliver Reichenstein, has posted some interesting observations on the App Store ecosystem. In a Google+ post titled “Revenue = X,” the founder of Information Architects explains how his decision to drop the price of iA Writer on the Mac and iPad has resulted in a way to “increase exposure without affecting profit.”

Dropping iA Writer’s price has resulted in more purchases than expected, and Oliver’s profits have largely stayed the same since he made his app cheaper.

iA Writer for iPad’s price was recently dropped from $5 to $1, and Oliver is selling exactly 5x more apps than he was before. On the Mac, iA Writer’s price drop from $10 to $5 has resulted in the same sales behavior. Oliver notes that, “No matter what price we choose, we always make the same revenue.”

What I expected was that at a certain point the price change would impact the sales profit positively or negatively but it never did.

I’m happy to be able to offer iA Writer to more people without losing too much money (see below), but I’m still puzzelled: It seems that cutting the price is a way to increase exposure without affecting profit. Either the app store is rigged, or the market seems to magically decide in it’s invisible head quarters how much money is going to be spent on an app. (I don’t think that the app store is rigged).

Oliver also says that app growth is affected by many factors, including, “support costs, the probability of super rare bugs and negative comments (not just on the App Store.)” Therefore, “unless your goal is to grow a big user base, cutting the price is not a recipe to increase revenue but to inflate your app.” 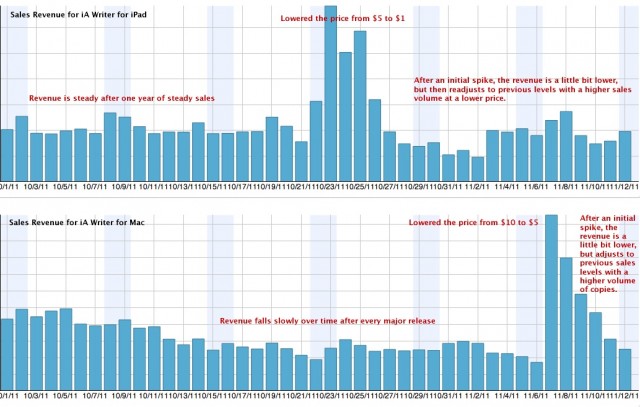 What do other developers think of this phenomenon? Do low-cost apps end up providing steadier profit in the long run?