The console gaming industry has been suffering as of late, with companies like Nintendo reporting record losses and hardware price cuts. On the opposite side of the coin, the mobile game industry has skyrocketed to the forefront of innovation and user adoption, thanks largely to the mass distribution provided by the App Store.

A new report by Flurry Analytics shows how the iOS and Android platforms are absolutely dominating the US mobile game industry, with over half of the revenue in the US coming from the App Store and Android Market. 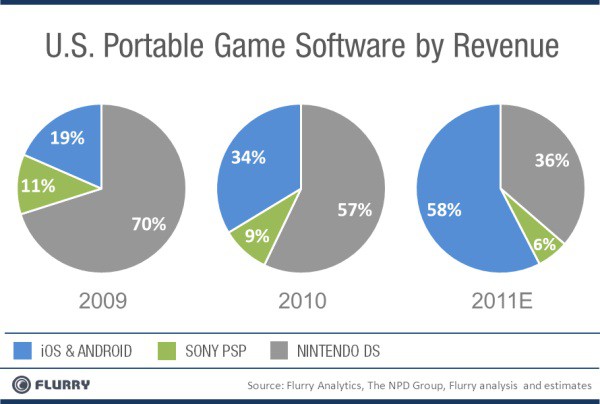 2011 has been a pivotal year for mobile gaming. In 2010, the Nintendo DS accounted for a staggering 57% of mobile revenue, while iOS and Android only took 34%. This year, the situation has flipped, with iOS and Android stealing a whopping 58% of revenue in the US. Sony’s mobile game revenue has continued to shrink since 2009.

Nintendo has refused to make games for smartphones and coincidentally reported its first net loss in history. The DS has seen multiple price drops, and the CEO took a 50% salary cut after the most recent drop. Sony is trying to get in on the action with products like the Xperia Play, but the company has yet to set its sights on monetizing titles in the App Store.

iOS and Android’s success can be attributed to a multitude of factors. Freemium games continue to revolutionize the way game developers make money in the App Store, and titles are generally much cheaper when compared with console prices. Apple added an incredible boost in graphics performance with the iPhone 4S, and mobile processors are starting to allow for console-quality games on a smartphone or tablet device.

Companies like Sony and Nintendo need to decide quickly whether or not to jump ship completely and sink, or start developing for iOS and Android. There’s only so much space left that the App Store hasn’t cannibalized.

Imagine what the chart will look like next year.