The new Doctor Who Encyclopedia for iOS claims to offer everything a Who fan might need to know about the three most recent incarnations of TV’s best-known time traveller. But this is one app that could do with a zap from a sonic screwdriver: although it’s stuffed full of facts, the presentation could be improved.

The app relies on glossy imagery, of which there’s plenty. If you want pictures of the Doctor, his companions, and every alien beastie they’ve ever met, there are plenty for you to browse here. A handful of “portals” provide gateways to more detailed content. Tappable hyperlinks show you new stuff as you explore.

It looks great, but good looks aren’t everything. 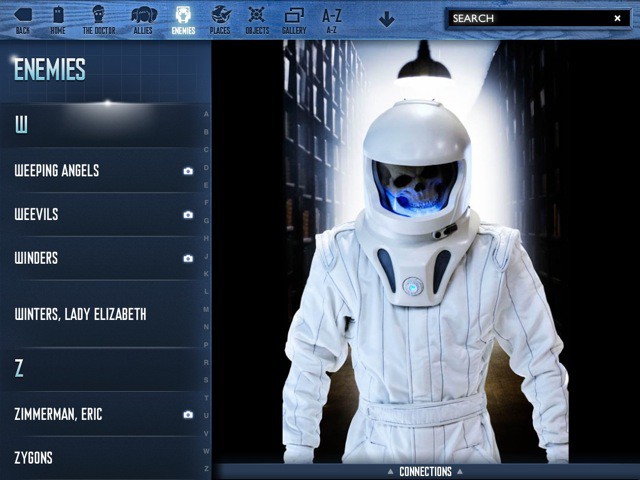 I found the app disappointing, mainly because the detailed content for every entry is presented as a single huge block of text, crammed into a tiny sidebar. No thought has been given to formatting this text to make it more readable – which, when you’re reading something like River Song’s complicated time-travelling life story, gets a little hard on the eyes.

Another disappointment is the nagging upsell which lurks in the bottom corner of the screen, reminding you that you only own so many of the 3,028 articles you could own – if you felt inclined to buy additional sections that cover the 9th and 10th Doctors.

Your initial app purchase only covers the adventures (to date) of the 11th Doctor. If you want to know all about the 9th and 10th Doctors (and their associated companions, enemies, and so on), each one will cost you an additional $5.

Fifteen dollars for the entire set sounds like a lot of money in App Store terms, but I suspect a lot of fans would be happy to pay out that much. There’s plenty of detail here, about things and characters that barely get a second mention in the script. It’s a pity some of it is so tightly crammed together – this app could do with a little room to breathe.