Siri is one of the iPhone 4S’ biggest selling points, and I think anyone who’s had chance to try out the feature would agree that’s it’s pretty exceptional. For the time being, it’s exclusive to Apple’s latest iPhone, but one hacker claims to have it running on any device running iOS 5, and says a jailbroken device is not necessary.

An iPhone developer that goes by the name of Jackoplane announced today that he has successfully ported Siri to other iOS 5 devices, and gotten it to communicate with Apple’s servers without any issues. It means that all iOS 5 devices are capable of running Siri — you just need to install it.

So when can you get it? Well, according to Jackoplane, he’s not sure yet, and does note in messages posted to Twitter that “the hardest part is still ahead.” 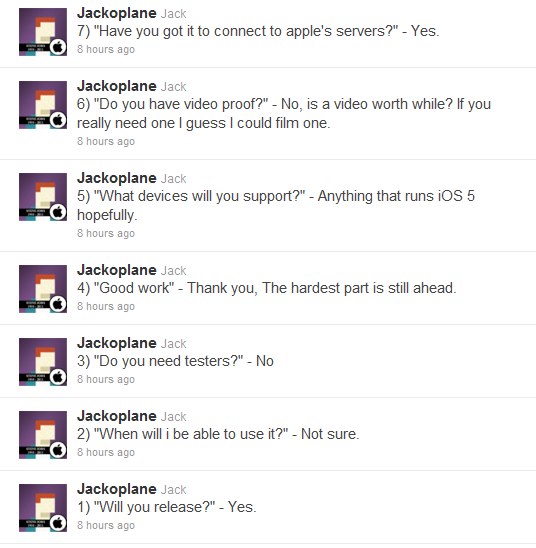 The full list of devices supported by Jackoplane’s hack includes:

It’s unclear at this point how Jackoplane has gotten Siri to work on other devices, or when the software will be available. However, I have a feeling that Apple will put a stop to this soon after its release by blocking any device that isn’t an iPhone 4S from its servers.

Still, this is promising news for those without an iPhone 4S, and those who would like to use Siri on their iPod touch and iPad. Would you like to see Siri on older devices?