Despite his battle with illness during the years the led to his death, Steve Jobs never stopped inventing products and systems that would do their little bit to change the world. This patent, published just over a year ago, details a concept invented by Steve that could prevent users from inadvertently performing actions on a computer.

Published by the U.S. Patent & Trademark Office, and picked up by AppleInsider, the patent is entitled ‘Three State Icon for Operations’, and lists Steve as one of only two inventors. While Steve’s name is on over 300 Apple patents in total, this is one of the most recent.

The patent details a dynamic software icon that attempt to prevent users from performing certain actions accidentally. It notes that users can sometimes initiate activities that cannot be stopped once they have started, such as formatting a disk, and burning a CD or DVD.

“Initiating an improper operation on the computer can be costly in terms of both time and money. Recording medium may be recordable only once such that if a mistake is made while recording, then the medium will not be reusable.”

While systems already attempt to prevent this by using dialog boxes that require you to confirm your action, Jobs’ idea introduces an additional step using a dynamic icon that presents itself in three states: the initial selection of the icon does not perform an action, but will simply change the icon from its first to its second state.

The icon requires a user to pause and verify they want to perform the selected activity, before moving the icon into its third state. 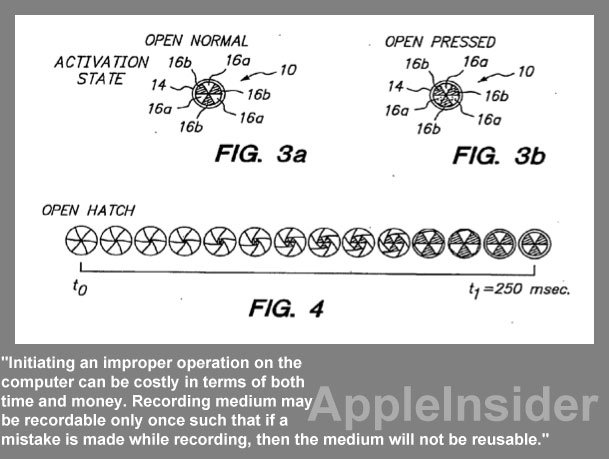 In this illustration, Apple uses an icon that resembles a camera aperture or iris. The initial click opens up the aperture to display an icon similar to a radioactive symbol. The second click then initiates the operation and the icon changes again.

It seems like the evolution of the double-click, and could one day be a part of the Mac OS operating system.

What do you think of this idea?