There’s plenty of naysayers pooh poohing the iPhone 3G S. It’s a minor upgrade, they say. Not worth the money, especially for 3G owners.

But after buying one on Friday morning and playing with it all day, I can say with 100% certainty that that’s complete and utter rubbish.

The 3G S is a major step up from the iPhone 3G, worth every penny. Sell the car; sell the house; sell the kids: you must have this phone.

The full review after the jump, plus plenty of test photos and video shot in sunny San Francisco.

Here’s the three reasons you should immediately treat yourself to the new iPhone 3G S, even if you’re broke like me:

1. The camera. Autofocus is fantastic. It’s night and day compared to the camera on the 3G. Video is great also, although the microphone is mediocre. Whatever. Autofocus alone is worth the upgrade.

2. Speed. The faster chip in the 3G S makes the overall iPhone experience much, much snappier, especially Web browsing. Pages render super quick, and I’ve yet to encounter any keyboard lag in email or other apps. (One caveat: Web browsing is also much improved on previous iPhones with the 3.0 software upgrade. But overall, the 3G S experience is much faster).

3. Olephobic screen. Silly, I know, but thanks to its oil-resistant screen, the 3G S stays much cleaner. And it wipes clean with a quick swipe across your shirt. I’m not a germaphobe or neat freak, but it really does make the screen easier to read without a coating of face grease.

The Need; The Need for Speed

I bought the iPhone 3G S early Friday morning at an AT&T store in San Francisco’s Mission district. Unlike the Apple Store downtown, there was a barely a line. When I arrived with my son at about 7.30 AM, there were just two people in front of us. Four or five more joined behind.

Thanks to AT&T’s magnificent corporate generosity, I qualified for the upgrade price of $299 for the black, 32GB model. I’m only too happy to enter into another two-year contract, until next year of course, when Apple upgrades the iPhone again, and I’ll throw another hissyfit.

The first thing I noticed was the overall speed. Thanks to its 600MHz processor, everything is much snappier — boot up, app launches, keyboard typing.

But it’s the Web browser that clinches it for me. I spend probably the most time in Safari and I couldn’t be more grateful for the extra speed. I don’t have to go get a cup of coffee waiting for complicated pages like the New York Times to load. In fact, reading the Times used to be a chore. Pages would take forever to load, even on a WiFi connection. Now the site loads instantaneously.

Hungry for cake and coffee, I took a stroll in the Mission, snapping a few pictures and video of the beautiful sunny morning.

The new camera is 3-megapixel — one more megapixel than the previous iPhone. It is pretty fast in good light. The autofocus quickly finds its target, although it can hunt around in a rapidly changing scene.

Here’s a fruit stand on Mission Street @ 16th. Color and detail looks good to an amateur like me. Check out the full size version here. 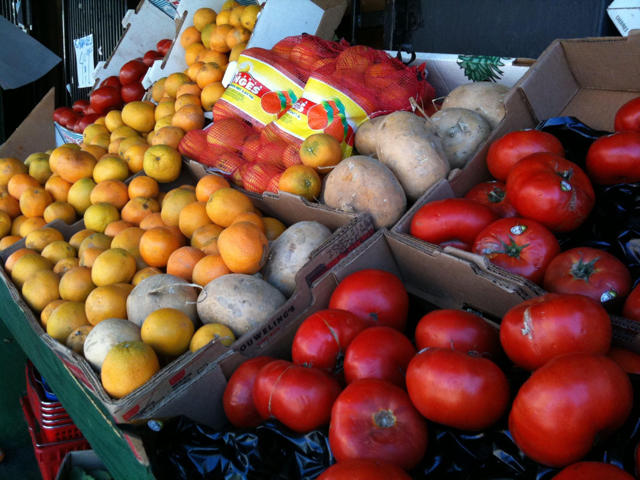 To lock the focus on the subject, you tap in the focus box that appears onscreen. I found it worked well most times, though sometimes wandered in complex scenes like reflective windows.

Compare these two shots of a doorway. First I focused on the door handle between the security bars; then on the bars themselves. Changing the subject with the focus box is dead easy — it’s a nice interface for  finger-controlled camera, which is actually easier to use than autofocus systems in point-and-shoots. 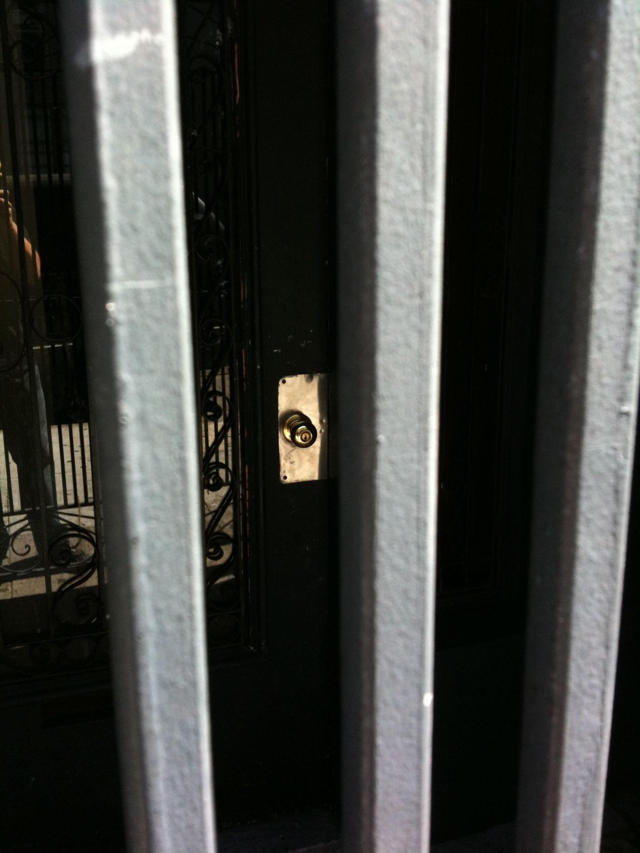 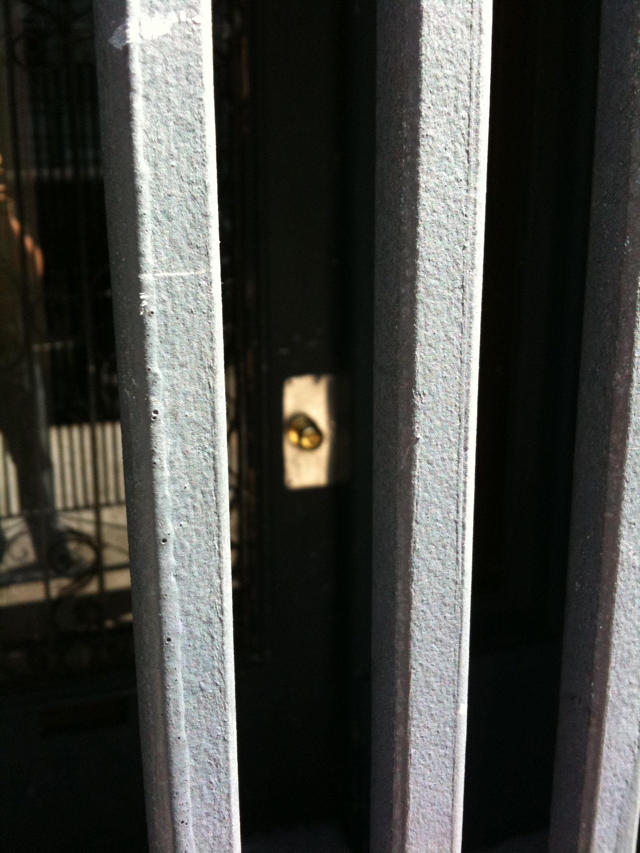 However, I couldn’t get a decent picture of my bike in the lower indoor light. I took a few a pictures of the magnificent machine, but they all came out blurry like this shot. Likewise, indoor shots of my hyperactive kids were a challenge. See the shots below.

The camera’s no macro shooter for sure, but I found you could get in pretty close — I estimate about an inch from the subject. 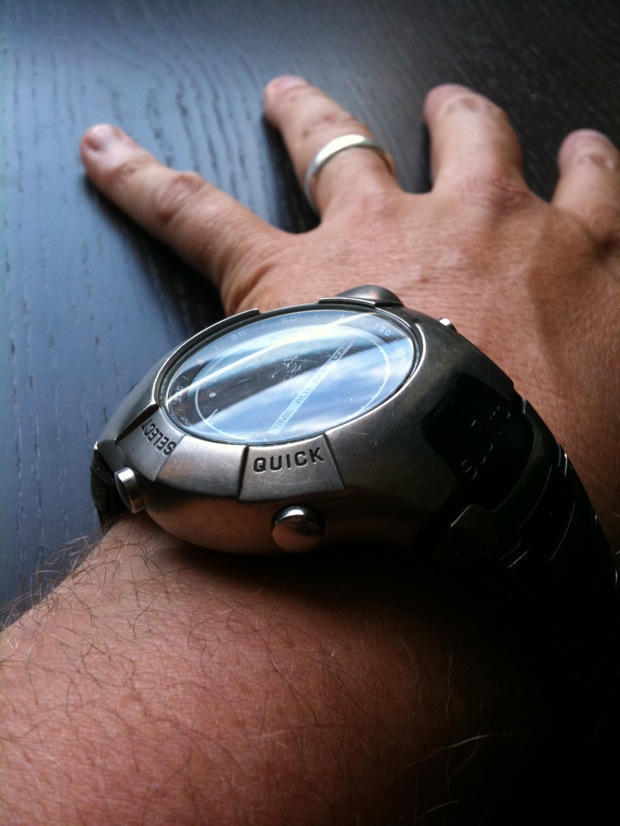 Color and detail look great to me — but I’m an amateur. Here’s a rim in a custom car shop on 17th @ Capp. 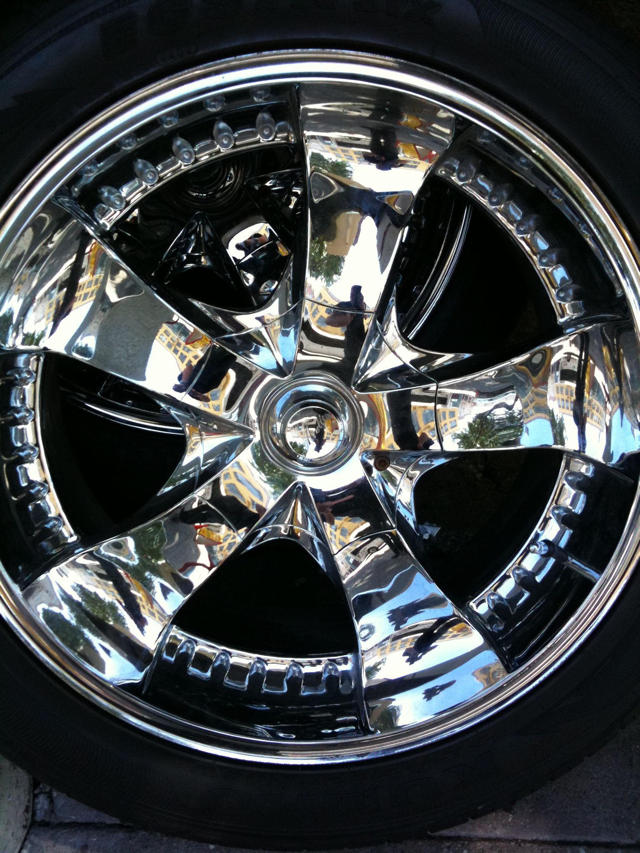 Clarion Alley between Mission and Valencia Streets reeks of pee but is full of colorful murals.

No doubt thriving on the pee, the flora of Clarion was in full bloom. 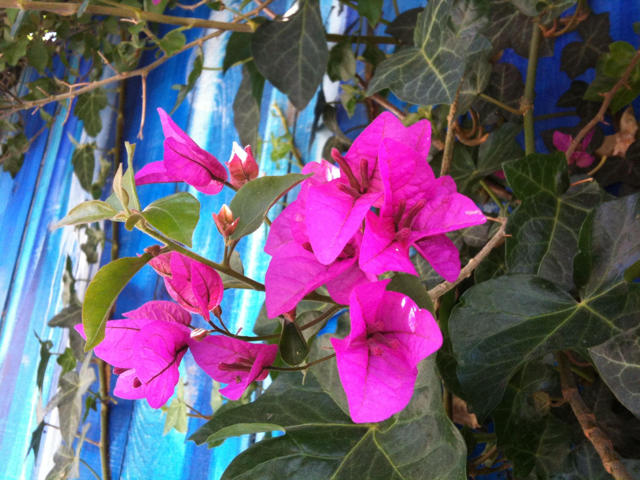 Here’s the shop window of a bookstore on Valencia Street. For some reason, I was trying to get the camera to focus on a prominent scratch on the surface of the glass. It focused on the reflections instead. 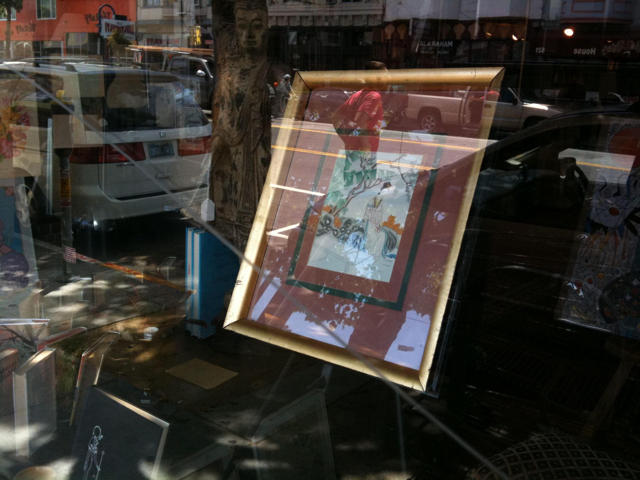 A gentleman of the Mission and his dog. 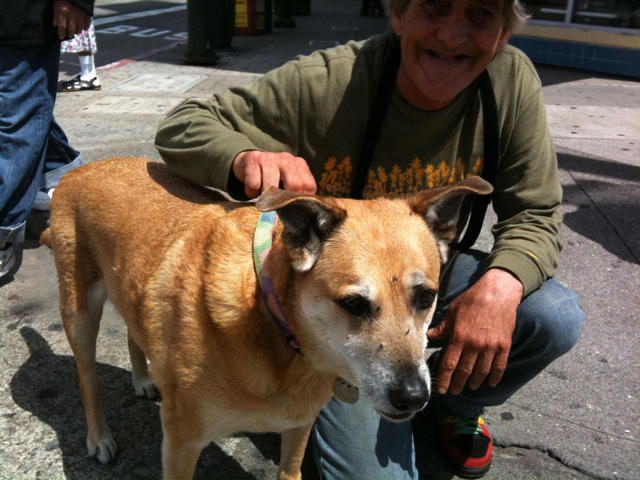 This produce market sells pinatas by the pound. 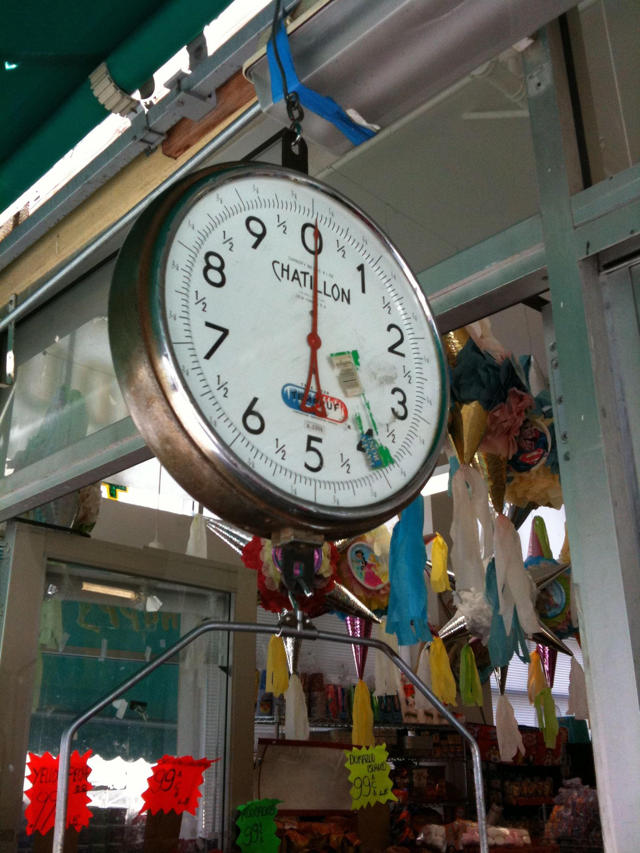 In good light, the camera is capable of capturing moving subjects, like the taxi cab below, which was doing about 15 mph. 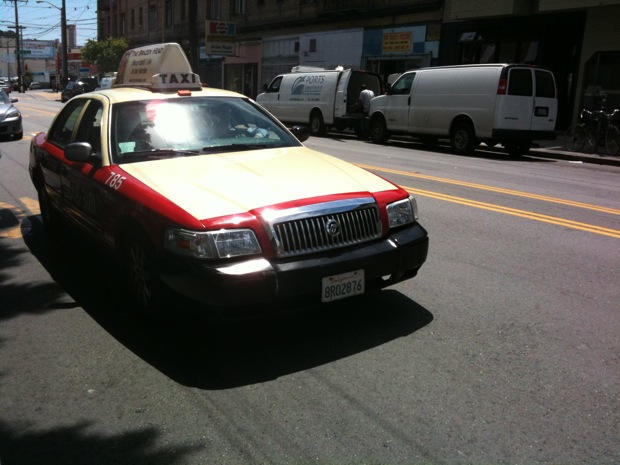 In poorer light, like my office, and with a fast-moving subject, like a kid, the camera did OK. It’s no SLR, but it’s almost as good as a point-and-shoot. Here’s my son, Lyle, clowning around. Most of the shots are out of focus, but it got a couple OK.

The video camera is surprisingly smooth and fluid. It shoots VGA video (640 x 480) at 30 frames a second, though the frame rate sometimes dropped to 25fps. Not HD by any means, but perfectly adequate for my purposes — recording precious moments with my little angels while they raise hell, swear like sailors, smash things and generally behave like a pack of animals.

Here’s some short videos I shot around the neighborhood. I think they look pretty good. The movement is fluid and the quality is surprisingly high.

Hosting: Unfortunately, I couldn’t find a good way to embed the video to show it at its full quality. The videos below are hosted on Flickr, which has better quality than YouTube or Vimeo, but still compresses heavily. There’s a lot of compression artifacts and jittering not present in the originals. In each case, I’ve provided a link to the original videos on my MobileMe page, which show the full quality, but can’t be embedded.

The microphone had no problem recording the sound of this fire marshal’s truck as it screamed by.

But the microphone wasn’t so good in this quick interview with William Vigil, co-owner of the Puerto Alegre restaurant on Valencia Street, which serves killer margaritas. The microphone here is OK. You can hear what he’s saying, but it’s definitely not broadcast quality. However, the video quality is pretty good for a dimly-lit restaurant.

And here’s the reason I want a video camera on my iPhone — for recording the kids. I’m totally delighted with the results. I have access to all kinds of fancy cameras and HD camcorders, but I never, ever have one on me when I need it. I use a good camera on special occasions, like birthday parties, but I don’t routinely carry one around. I do always have my iPhone though. What’s the best camera? The one you have on you.

Apple says video can be edited on the iPhone, which means you can trim the beginning and the end. You can’t remove edits from the middle or stitch two shots together.

However, sharing video is dead easy. Hit the share button, and up pops a dialog allowing you to email the video, or send it to MobileMe or YouTube. When AT&T supports it, MMS video will also be an option.

Emailing a video couldn’t be easier. It quickly compressed (really quickly, in fact) and dispatched in seconds. The recipient said it looked pretty good. It’s a two-step process, and is a lot easier than emailing video on a computer.

What didn’t work so well.

AT&T: Although I now love AT&T with all my heart, its network still sucks. One of my favorite apps, Google Maps, is just horrible to use on a weak connection. Data takes forever to stream and the app lags. Unfortunately, even the greater speed on the 3G S can’t compensate for a pisspoor connection.

Voice Control: I had such high hopes for voice control, which is supposedly initiates calls and plays songs by simply saying, “Play Britney Spears.” At first, it seemed to work unbelievably well. It made calls and played songs, just as a I commanded. I thought it might have trouble with my British accent, but it worked fine. Then it started to go wrong. It didn’t understand what I said. It dialed some obscure acquaintance when it should have been playing a song. Trouble is, you have to trust it or its useless. Unless it works every time, I’m just not going to use it.

Conclusion: Here’s my advice. If you’re happy with your older iPhone, do not under any circumstances play with the new 3G S. Do not visit an Apple Store. Do not allow friends or co-workers to show you their shiny new iPhone 3G S.

It’s so much better.