We’re all familiar with how the big players are doing in terms of market share. Companies like Google, Apple, Samsung, RIM, Nokia and HTC make the headlines every day. But what about the 36% of the mobile market that doesn’t get mentioned? That chunk of the cell phone space usually gets dubbed as the “other” part of your typical analyst graph. The graphs basically say, “Nothing to see here, move on.”

Just who are these no-name phone makers that are outselling all of the industry’s ‘top dogs’? 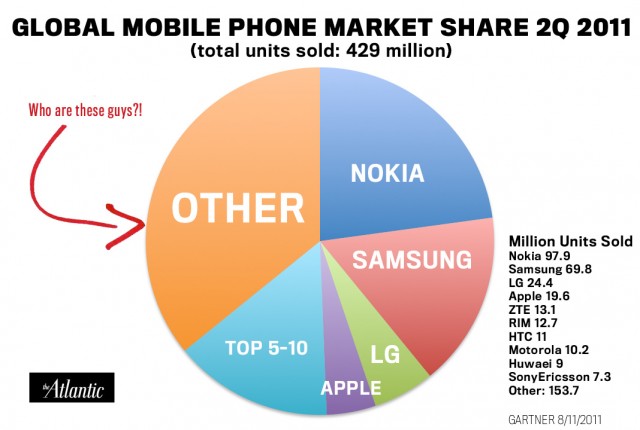 An interesting report in The Atlantic today tackles the largest part of the cell phone market that never gets mentioned — the “others.”

Quoting Gartner’s last quarterly numbers, the top 10 cell phone makers (Apple, Google, Samsung, Nokia, LG, etc.) control 64% of the market. Many of these companies, including past juggernauts like Nokia and RIM, are on a sharp downward trend in sales. By contrast, the ‘other’ phone makers out there have doubled their market share since 2004.

The unnamed chunk of the pie graph can be divided into three tiers: ‘mom-and-pop’ factories, smaller manufacturers, and up-and-coming phone companies that are poised to compete with the likes of HTC and Motorola.

These three tiers account for 36% of global phone market share and 153 million units sold last quarter. Discounting Nokia and Samsung, that’s more than all of the top 10 phone makers combined.

The bottom ‘mom-and-pop’ tier is clearly not going to become the next Fortune 500 company anytime soon, but when dozens of smaller factories are considered together, the numbers add up to something significant.

Next up are the slightly larger companies that are mostly located in China and India. These manufacturers make cheap ‘burner’ phones, but their sales are proof that not everyone can afford the newest iPhone. Together, this second tier sells about 30 million phones a quarter — that’s 10 million more than Apple.

At the top tier are domestic manufacturers like MicroMax in India. These companies have gone from making 0 phones to millions each quarter in a matter of a few short years. They sell a varied product line of cheap phones and smartphones, and they’re on the heels of top 10 companies like HTC.

What can be gleaned from a look at the ‘other’ part of the graph is that the mobile market is a much more interesting place than the media paints it to be. There’s a vibrant sector of unnamed manufacturers that are helping to drive consumer adoption of cell phones and the wireless age. It’s not all about Apple and Google. Nokia is still the best-selling brand in the world, and Apple is the new kid on the block with some catching up to do.