I was just speaking with another reviewer here about how surprisingly common it is for manufacturers to copy each other’s designs. To ‘port an entire line of products, though, is a little more unusual: iHealth has just announced an app-enhanced digital scale, blood pressure monitor and baby monitor that mirrors Withings‘ entire lineup, gadget for gadget.

The first of the trio is the iHealth Blood Pressure Monitor, available now through their site for $100. In October, the company will ship their iBaby Monitor ($200) and the iHealth Digital Scale ($70). It’s interesting to note that two of the iHealth gadgets are priced lower than their Withings counterparts (Withings have not yet settled on pricing for their baby monitor).

Just like the Withings systems, all connect with iHealth’s free apps found on the app store (the only one currently available is iHealth BPM).

Update: an iHealth spokesperson points out that iHealth, not Withings, was first to announce and ship an app-enhanced blood-pressure monitor:

The iHealth blood pressure monitor was not only announced and available first, it’s also been picked up my major retailers including Apple online and in-stores throughout the U.S. and Canada, Costco, Best Buy and a host of others…it took six-plus months for the Withings BPM to be available in the U.S. 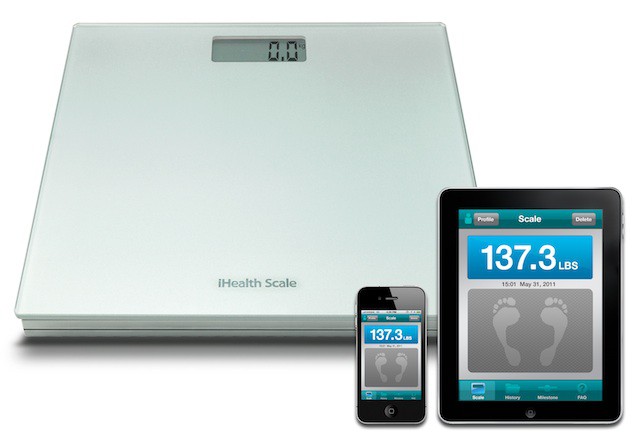