In April, I got terribly excited about Flight Control, an air traffic control arcade-oriented ‘management’ game. The premise is simple: drag aircraft to landing areas. The reality is an intense arcade game where game over is a blink of an eye away.

Recently, I’d heard rumors of updates. But with the original game such a fantastic, simple and polished production, there was the worry that it’d be ruined under a pile of new features. That worry went away on playing Flight Control 1.2, which keeps the original’s gameplay intact but introduces two new airfields and new craft.

The beachside resort is the first new airfield, adding water landings to the mix. Initially, this seems little different to the original game, but the number of craft ramps up rapidly and the revised landing layout is tougher than the original’s. 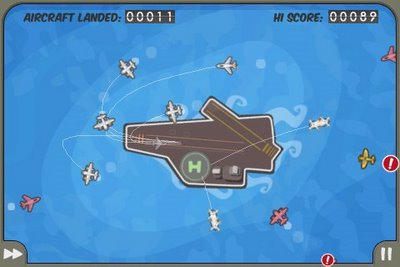 The real star, though, is the intense and absurdly tricky aircraft carrier level. Military jets move just a tad faster than anything else, and you’re soon not only juggling that, but also a surprising twist when you realise what happens to landing areas on a moving ocean… Frankly, we’ll be shocked to see 10,000+ landing scores on this map for some time to come.

Overall, this is a triumphant update—a classic iPhone game made even better. The fact that it’s still under a dollar [App Store link], for a game that betters most other handheld titles out there, just goes to show what great value Apple’s platform can be for gamers.

TIPS: If you’ve any tips for dealing with the new airfields and getting high scores, please post in the comments below.