Apple has already overtaken Nokia as the smartphone leader when it comes to the number of units manufactured, but according to a forecast from DigiTimes, the Cupertino company could also overtake the once unbeatable Finnish phone vendor in shipments by the end of this year.

Apple’s iPhone shipments are expected to hit 86.4 million units by the end of 2011, according to DigiTimes, but Nokia’s will continue to decline to just 74.4 million units: 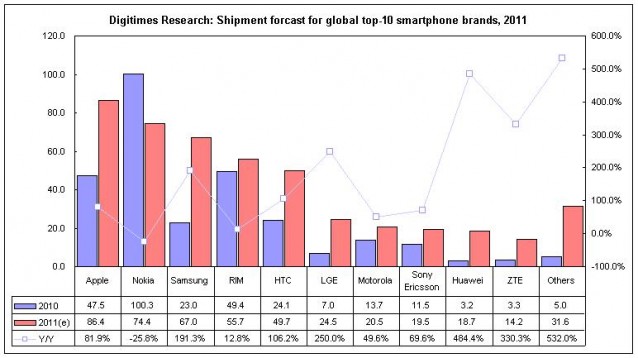 That’s quite impressive when you consider that the prospect of Apple overtaking Nokia smartphone shipments when the iPhone first launch was quite laughable.

However, Apple isn’t the only company to be enjoying growth. According to the forecasts, Samsung is expected to enjoy shipment growth of 44% with 67 million units shipping, while Huawai is expected to achieve a whopping 400% rise in shipments. HTC, LG and ZTE have also enjoyed growth during 2011.