We’re now less than two weeks away from the keynote of Apple’s annual Worldwide Developers Conference, where Apple is widely expected to demonstrate a next-generation iPhone for the first time. I won’t run down all the anticipated features here, but suffice it to say that we’re looking at largely incremental updates on the hardware side: faster processor, more RAM, more storage, and maybe a programmable magnetometer to enable true turn-by-turn GPS. It will be the iPhone, but better — and almost certainly not a worthwhile upgrade if you already own an iPhone 3G, since it will also benefit from the release of iPhone OS 3.0.

But the world hasn’t stood still. For the first time since the announcement of the original iPhone, there are legitimate competitors all around, many of them even approaching Apple’s thinking in creating a holistic ecosystem of supporting software, third-party development and services. There are three big threats to the rise of the iPhone right now: Palm Pre, mass availability of Android, and the Zune HD platform. Hit the jump to get the full story.

Interface Competition — Palm Pre
The first several rounds of iPhone killers fell woefully short on any number of levels, but nowhere more so than on the quality of the interface. Inconsistent design, a lack of multitouch, and redundant gesturing that simply had no real purpose. As of a week from Saturday, that all changes. Palm’s Pre is a gamechanger, and it is the only mobile device I have seen that actually pushes the iPhone’s user interface to change and grow. Not only is the visual style strong and aesthetically pleasing, but the software team at Palm has created brilliant new gestures in the “card” metaphor app swapper. From hardware to software to physical interface and visual UI, this is just an incredibly well-planned mobile platform. The Pre, if it’s even reasonably stable, is going to be a gigantic hit — and its focus on multitasking demands that Apple respond.
Suggested solution: Just give us multitasking, Apple, and we’ll stop lusting after the Pre. 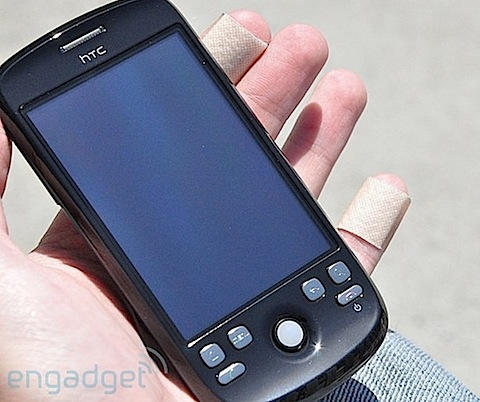 Developers Competition — Google Android
No one, not even most employees of Google and T-Mobile, would argue that the HTC G1 was a polished device. It was over-run with input devices, the industrial design was a nightmare, and Android OS 1.0 wasn’t even as polished as the lousy Windows Mobile 6.1. But Android was never about releasing one phone on one carrier. Google’s mobile strategy is about providing the operating system for as many different smartphones as it possible can. Pictured above is the Google Ion, which is the first next-generation Android device. The hardware’s nice, the new “Cupcake” build of Android fixes a lot of the initial problems with the phone, Exchange support for corporate mail is arriving soon, and, most importantly, this is far from the only Android phone this year.

In fact, Google has said that it will have 18 different Android phones on the market by the end of this year — for every carrier at a wide variety of price points. No single Android device threatens the iPhone. But if a huge number of Android phones are minor hits, the mobile development community might flock to the platform, especially since Google is nowhere near as likely as Apple to arbitrarily reject an application from its app store.
Suggested solution: Make the app store approval process transparent, and stop blocking any apps that are obscene because they have access to the Internet. Or, conversely, reject Mobile Safari. 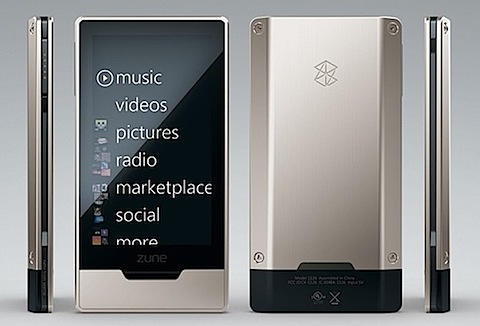 Specs Appeal Competition — Zune HD
The original Zune was a disaster. The improved Zune 2 barely sold better (for more on the saga, read the end of this post on my other blog). The new Zune HD? Well, we’ll just have to see. But it’s certainly bringing big game for a head-on collision with the iPod touch — and, by correlation, the iPhone, too. While previous Zunes have matched iPod specifications and hoped people would choose the Zune instead of an iPod, because… well, OK, that part of the business plan was never a focus. Just because, OK?

That’s changed with the Zune HD, which leapfrogs the existing iPod touch and iPhone family with an OLED screen, 720p HD video output with the help of a dock, and a new version of Mobile Internet Explorer. Well, OK, it’s a lot like the iPod touch. The OLED screen, HD output and ability to play HD Radio (a feature demanded by literally tens of people) are the only unique offerings here. And even then, Sony’s way ahead on getting an OLED media player out the door. Still, these are big features Apple hasn’t matched yet.

So why is the Zune HD worth mentioning when previous Zunes have been so ineffective in making a dent in Apple’s dominance? One reason, and one alone — promised integration with the Xbox. If there’s one thing Microsoft understands in entertainment as well or better than anyone, it’s how to create a compelling gaming experience with major online components. If Zune HD is a stealth gaming platform (who’s to say that a D-pad and action buttons don’t pop out of the top and bottom?), then this is not only a device with some potential to capture somoe customers from Apple, but to deliver a comprehensive entertainment and gaming experience, from the living room to the road.
Suggested Solution: Work with hardware developers to provide an inexpensive gaming controller for the iPhone to help it better hold its own against the gaming platforms of Sony, Nintendo and Microsoft.

So there you have it. Three competitors that will actually make an impact on the world’s perception of the iPhone. And as Apple gets ready to show off its best, let’s hope Apple’s got the goods to blow them all away. June 8, ladies and gentlemen. I can’t wait.