Me & Steve Stories — Some of the best stories about Steve Jobs are the personal, intimate ones. We’re collecting them here and will run as many new stories as we can find. If you have a story about Steve you’d like to share, please send us your submissions.

In September, 2004, KC Bradshaw was working as a trampoline installer, which is how he got to meet Steve Jobs in person and leave with a very special souvenir. 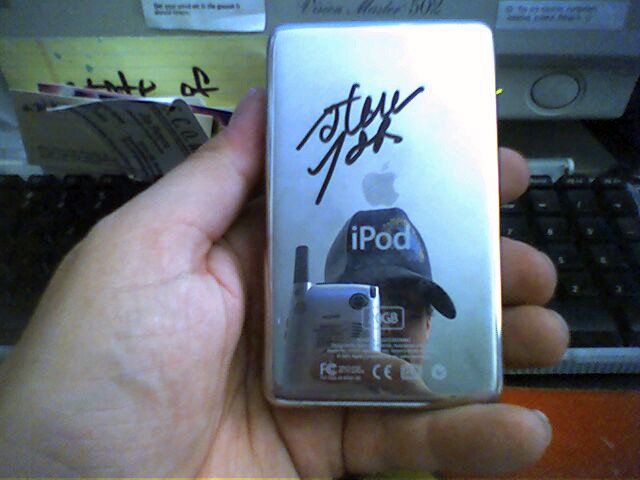 It was as simple as “Hello, I’m Steve… nice to meet you. Come on into my house.” And with that, we walked through his front gate and through the garage to the backyard.

I can say that going into it, I was strangely nervous. I guess, it’s not every day that you get to meet one of the most famous icons in the modern computer business especially at his house, while he is finishing his breakfast.

Steve lives in a nice, big expensive house in Palo Alto — but it is a different kind of nice then what you would expect; more “Buddist-nice” than “Trump-nice.” And actually really close to the type of house that I would love to live in, had I enough money to spend.

Approaching the house, you walk through a front yard filled with fruit trees; past an opening in the exterior 6-foot wall running around the property; into an open front yard which splits into the left to go up to the main house and straight back through an antique garage; to the very large backyard (so big in fact, it looks like he knocked down a neighboring house and is using the lot for his yard). He lives on a corner, even so, he has a rather large yard for this part of peninsula — filled with flowers, vegetables, fruit trees and rose bushes. The garden is nautrally landscaped (yet orderly) with nice pathways and benches everywhere. The centerpiece of the garden is a large teepee-shaped trellis. Quite an understated ellegance.

I will spare you most of the boring details of the day. We set up in the back corner of the yard, and began the install, which took us three hours to complete. During the process, he would come out and check on us every 45 minutes or so, usually staying for a bit to chat about the trampoline, the company that built it, the manufacturing process, or how the trampoline could be simplified and improved upon. We didn’t really get any opportunities to chat about things outside the task at hand, but it was nice that he would spend any time at all with us. He even got up to test-jump a bit too (I really, really wish I had that on video).

Before we finished the install, his daughter discovered the present and came outside to start jumping. She was having a party of some sort with all her friends, and was very excited to have a new trampoline! We watched the girls play as we hung around, waiting for Steve to finish a conversation in his front yard.

He finally finished talking and came around back. Rob explained a little about the satefy rules and the specifics of the install as we walked back towards the back corner of the yard. He jumped up inside the trampoline and started jumping with his daughter. It was really sweet. He jumped around inside a bit, then got out and gave some encouraging words to her and her friends. Then he paid us the install fee (plus the largest tip Rob has ever recieved on an install).

“And one more thing” we sheepishly said. (As we prepared to ask him for a favor)

Cut to us lightning-quickly whipping out our personal music players: Rob’s new 4G model, and my beat-up old 2G brick from 2002.

He looks at mine and continues, “and that one is going to be a collectors’ item soon!”

I think to myself, “exactly!” and say “true, it’s a classic design.”

Then he asks us some questions about how many of our friends have iPods and if we use iTunes Music Store and we answer honestly. I mention that I am waiting to get a new iPod with a larger hard drive (hoping that he will reveal any information on the rumored next model). He seems to pause a moment, but doesn’t let any secret cats, out of any well-designed Apple bags. But, I could tell that he wanted to say something.

If you have a story about Steve, please share it with us.

KC Bradshaw works as a freelance graphic designer for Exkclamation.com. In his spare time, he photographs the finer textures of life; rides his classic motorcycle; and absolutely loves music. His Twitter: exclamation. KC’s story was originally published here.