In a unique kinetic tribute to Steve Jobs, media producer and marathon runner Joseph Tame has run a 21km long course though the streets of Tokyo in the shape of the Apple logo – and tracked the entire endeavor on his iPhone with GPS and an exercise app.

On his blog The Art of Running, Tame specializes in creating and running large scale shapes and patterns that he can track and map for posterity using the Runkeeper app and online service. He notes that he has become an Apple convert in the past few years and getting an iPhone really changed his life.

It’s for this that I’d like to personally show my appreciation to Steve for his vision and leadership, which has made a direct positive impact upon my life.

This morning’s run, which spanned central Tokyo, took me first down the western side of the Imperial Palace, across to Roppongi, through Omotesando, then up to Shinjuku. The leaf is in Kagurazaka, and the start/finish point just by the entrance to Yasukuni Shrine. 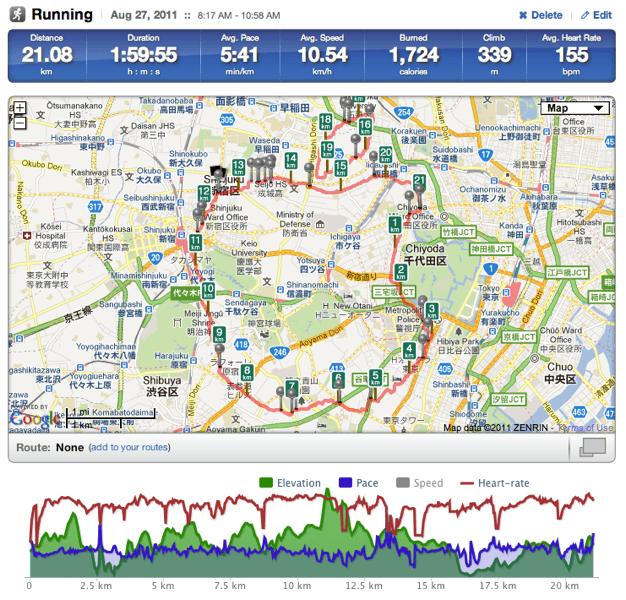 Other figures and shapes Tame has run in the past include Hello Kitty, the Twitter bird, and his own name. Part performance art, part workout, and fully temporal – good stuff. Thanks Joseph!