You can easily remove apps that you have purchased from the Mac App Store using the new Launchpad feature in Mac OS X Lion.  However, since Launchpad shows all the apps installed on your Mac you will need this tip to show you which ones it can delete.


If you want to delete a Mac App Store app all you have to do is access Launchpad using the five-finger pinching gesture on your trackpad. Once you are in Launch pad you’ll see numerous pages containing icons displayed in a grid on each page. You can switch between pages by swiping left or right with two fingers.

Once you’ve located the application you want to delete click and hold its icon until all the icons on the screen begin to jiggle. Alternatively, as one of the commenters iKolja points out, pressing and holding any option key will also cause the icons to jiggle. If you see an app with an icon that has an “x” button on the upper-left side of the icon then that app is from the Mac App Store. Simply click on the “x”  and a confirmation dialog box appears. Press Delete on that dialog box and the app is deleted from your Mac. 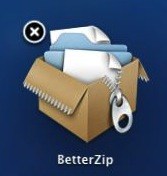 If you don’t see the “x” then two things are possible:  either the app wasn’t purchased from the Mac App Store or you do not have administrative privileges on your Mac.

If  you deleted an app  you can easily reinstall it later from the Purchases tab in the Mac App Store via the Install button.