That awesome MacBook Pro prototype with built-in 3G that we reported on yesterday was removed from eBay at the request of Apple last night, after bidding reached a whopping $70,000. However, its seller has been posting further details of the device on the MacRumors forums, revealing its magnetic MagSafe-like antenna setup.

Everyone wants to know more about this MacBook Pro prototype, so since joining the MacRumors forums, “evilroot” has been posting as much information as he can to describe the device, in addition to some more pictures. What’s most interesting about the notebook is of course that antenna, which he believes has been well designed:

Reading through the thread the antenna seems to be the hottest topic, mostly how “ugly” it is. Really in person it seems quite well designed, and not out of place with the rest of Apple’s look.

While the antenna may look tall and garish, it’s not as big as the initial pictures would make you believe:

Honestly I think most of this stuff about the antenna looking bad is due to the angle I took the picture at. It looks rather huge. In reality it is quite tiny, it only protrudes about 2″ from the display when extended and is maybe a millimeter or two thick.

What’s most interesting is that the antenna is actually fixed to the device with magnets — kind of like those used for the MagSafe feature — and can be removed fairly easily. As noted by MacRumors, magnetic antennas are actually a feature that Apple patented back in 2008, designed to sit on the outside of a notebook’s casing so that their reception isn’t obstructed. 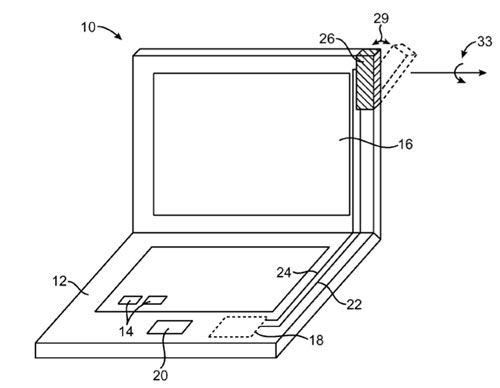 The antenna may exhibit improved transmission and reception efficiencies when the antenna is placed in an extended position away from the conductive housing.

The idea behind a magnetic antenna is exactly the same as that behind the MagSafe adapter: to prevent damage to your machine. In the same way Apple doesn’t want you to trip over your power cord and pull your MacBook onto the flaw, it also doesn’t want you to knock your antenna and snap it off, so it’s designed to detach easily. 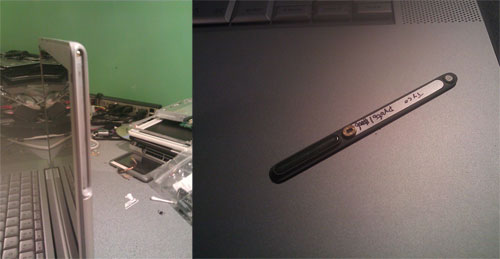 It’s a nice idea, but how often would we knock it off without realizing and lose out antenna? Maybe this is one of the reasons why we’re yet to see MacBooks with 3G aerials.