Apple’s decision to not include a USB Stick containing a copy of Mac OS X Lion for system recoveries with the new Mid-2011 MacBook Air might be causing the company a bit of a public relations issue this week. A fair number of MacBook Air users are venting their frustrations over the matter on Apple’s Support Community forums.

The discussion titled “When trying to reinstall Lion OS on new mid 2011 Macbook Air, error msg ‘This version of Mac OS X 10.7 cannot be installed on this computer’ comes up. What should I do to reinstall? ” has seen approximately 3,675 views and 88 posts.

The  heavily viewed and lengthy thread includes complaints from some users regarding problems they encounter when attempting to downgrade the version of Mac OS X 10.7 Lion build 11A2063 to the 11A511 build that Apple shipped via the Mac App Store or when they try to downgrade to Mac OS X 10.6 Snow Leopard. Unfortunately neither of these versions of Mac OS X are compatible with the new MacBook Air and therefore they will not install on it.

However, once users became aware of this some of them attempted to reinstall Mac OS X 10.7 Lion build 11A2063 using either their Recovery HD partition via CMD+R or Lion Internet Recovery via CMD+OPT+R during a restart. This is where things began to get interesting, because some users still reported problems while attempting to restore their MacBook Air.

One of the most interesting comments that a user named Rpagat1 made was:

I believe Chas is correct. For some reason, some of the 2011 MacBook air are having issue retrieving the lion build 11A2063. I can see in the log “Couldn’t find app store version, falling back to hardcoded 1.1.1”. AppleCare support told me that they’ll send out a thumb drive installer of Lion which in the first place Apple should have included in the package!!! I have to wait 3-5 days for it to arrive

Although unconfirmed I think that this comment is very interesting because it indicates that there might be a problem accessing Apple’s servers once in a while or that something else was going on. Remember Lion Internet Restore requires two things: internet access to Apple’s servers and validation by those same servers. The latter tells Apple that you are eligible to re-install Mac OS X Lion. In this case it appears that the user was prevented from doing either of these steps and so AppleCare offered to send them something that many of us, myself included, believe should have been included in the box — a USB thumb drive containing the restoration and installer utilities for Mac OS X Lion.

Compounding the frustration about recovery issues was the rumor that AppleCare would send end users a USB thumb drive if they are unable to use Lion’s built-in recovery tools according to this article on 9To5Mac.

Well it turns out that the aforementioned USB stick won’t be sent out to Mid-2011 MacBook Air users because it is not compatible with that computer. It will only work according to one post on the discussion forum on older Macs shipped prior to July 2011. I checked with AppleCare and confirmed with them that there isn’t, at present, a USB stick available for fulfillment that is compatible with either the MacBook Air or the Mac Mini that shipped in July 2011. Luckily users with older Macs running Mac OS X Lion can build their own USB stick.

Additional problems that users encountered with Lion Internet Recovery appeared to be connectivity or latency problems between their Mac and Apple’s servers.  I even encountered the problem myself as you can see below when attempting to perform an internet recovery via CMD+OPT+R. 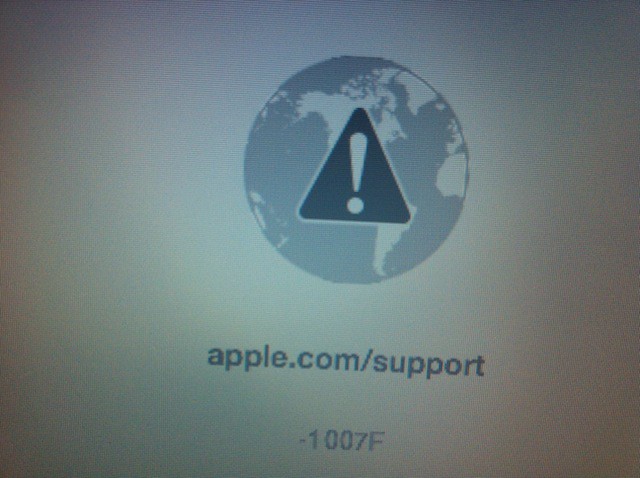 The errors encountered included: -1006F, -1007F, and -2002F. I attempted to get information about what these errors meant from AppleCare a few days ago, but as of today they have not replied to me with an answer. I received the -1007F error while attempting to perform a restore using a 3G Mifi 2200 device as mobile hotspot I suspect the problem in this case may have been latency, but that hasn’t been confirmed.

Apple’s decision to not include restoration media in the box with new 2011 MacBook Air computers might be a decision that will backfire on the computer maker as mounting  user complaints grow about restoration problems on the new MacBook Air.

The lack of a USB thumb drive users can use to restore their Macs with has caused users on the discussion forum to band together to find a solution. Some of them claim to have found a way to capture the Mac OS X 10.7 Lion build 11A2063 in order to make their own USB thumb drives and others agree that their methods work. I haven’t had a chance to try any of them yet. Many of those same users are also asking other concerned Mac users to drop Apple a note via https://www.apple.com/feedback to vent their frustrations about the whole situation.

Apple’s Lion Internet Recovery might see like a good idea, but it doesn’t look like the world is ready to give up control of their computer recoveries to Cupertino. Users, including myself, would prefer to be able to restore their computers themselves with or without an internet connection or when ever they damn well feel like it.

What do you think about the whole situation or the future of Lion Internet Recovery? What will you do if you need to recover your Mac and you don’t have internet access? Share your thoughts by leaving a comment.