Apple’s latest lineup of MacBook Air ultraportables are not only significantly faster than their predecessors, but thanks to those new Core i5 and i7 processors, they also beat the high-end 2010 MacBook Pro in early benchmark tests.

Whereas, tests carried out by Laptop magazine reveal the latest 13-inch MacBook Air earned an impressive Geekbench score of 5860 — an improvement in performance of over 100% on last year’s model. The 11-inch model was the most impressive, however, jumping from just 2024 last year to 5040 — a 149% increase. 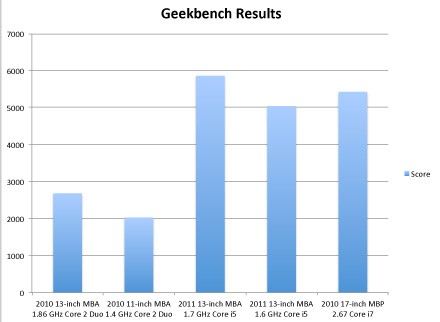 With numbers like these, Apple’s latest 11-inch MacBook Air rivals its 2010 high-end 17-inch Core i7 MacBook Pro, according to Electricpic:

Of course, Geekbench tests focus on the machine’s processing power and memory performance, and don’t always paint an accurate picture of how the device will actually stack up in the real world. However, these numbers certainly look pretty promising, and with improvements like these over last year’s models — which were already super speedy — these babies look like the ultimate Apple notebook for the vast majority of consumers.