At first, Dylan’s portrait looks like a pointillist painting. But on closer inspection, you see that Jobs is rendered in the words of “the crazy ones” TV ad, using a variety of Apple-related fonts — Motter Tektura, Apple Garamond, Myriad, Univers, Gill Sans, and Volkswagen AG Rounded, to be exact.

Dylan is a self-described ‘design nerd’ who lives in Aloma, Florida.

Says Dylan: “This is a typeface-driven design based on the “Here’s to the crazy ones” ad campaign from Apple in the 90s, using… fonts present in Apple branding and products.”

Hit the jump for a detail pic and link to the fullsize picture.

Check out the full size picture and revel in Dylan’s amazing attention to detail. 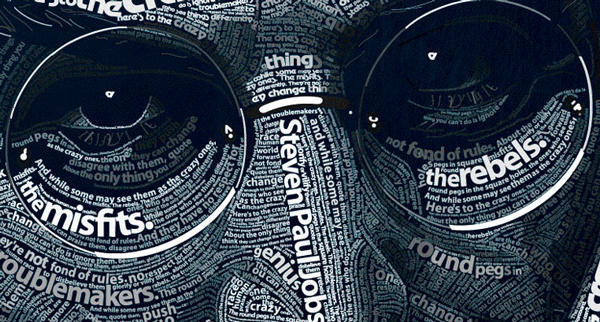