If you’ve ever dropped $14.99 on the Mac App Store for iPhoto ’11, iMovie ’11 or GarageBand ’11, you might want to check the update tab, because three large stability updates for the iLife trio have dropped. Here’s what is new.

iMovie: What’s New In Version 9.0.4
This update improves overall stability and addresses a number of minor issues, including the following:

• Support for opening projects imported from iMovie for iOS.
• Fixes an issue where some audio adjustments were not preserved.
• Addresses a performance issue when using large quantities of video clips with keywords.
• Resolves issue with slow application launch when working with large iPhoto libraries.

This update supports general compatibility issues, and addresses overall stability and performance issues including the following:

• Fixes an issue with the GarageBand Lesson Store not completing single or multiple lesson downloads.
• Corrects issues with some tempo-based effects falling out of sync with main song tempo.
• Resolves problems with Magic GarageBand project files not opening up correctly in the GarageBand tracks view.

Update 07/11/2011 at 12:12 PM PDT: Approximately 30 minutes ago the updates for iMovie, GarageBand, and iPhoto were pushed out via Software Update for users that purchased the iLife suite on DVD. If you have multiple Macs that need updating you can download the updates once at http://support.apple.com/downloads/, copy them to each Mac that needs updating, and perform the updates manually. 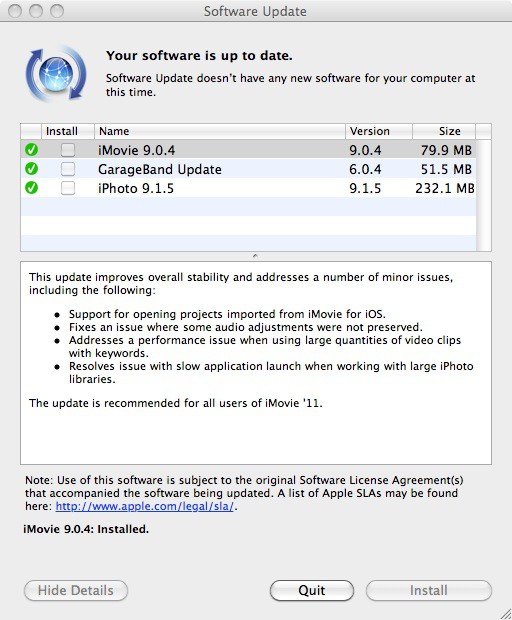