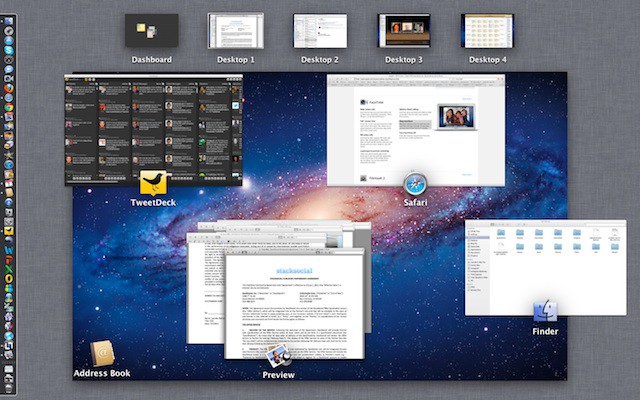 When Steve Jobs first showed a preview of Mission Control, critics said it was a confusing mess. It brings together the Dashboard, Exposé, and Spaces in one view, offering what Apple calls a “bird’s eye view” of everything running. It’s invoked with a swipe of the trackpad or by moving the cursor into a hot corner.

We really like it. We’ve long used Exposé, but often find it difficult to find a specific app with its disorganized mosaic of windows. Mission Control fixes that by grouping all the windows from an app together, making it easy not just to switch apps, but to find a specific window within an app. It also made us start using Spaces — OS X’s virtual desktops feature — for the first time. We could never get used to switching desktops in previous systems, but found it easy to do so in Mission Control. Now we group email and IM in one desktop, blog tools in another. It makes it much easier to navigate a ton of open apps.

This is one of the bigger wins of Lion from a user’s perspective. Way to go, Apple. 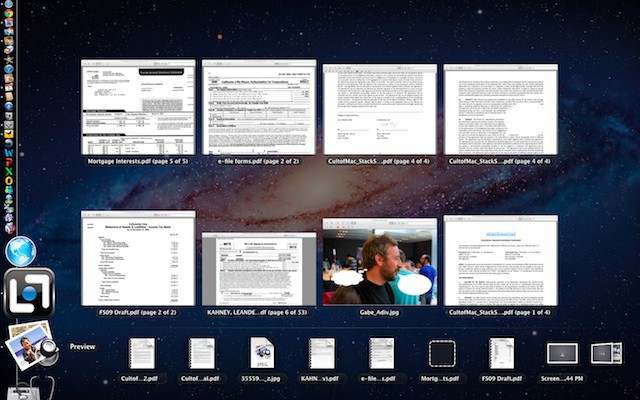 Lion also changes the way Exposé works. Exposé now groups windows belonging to the same application — a big improvement — and you can choose a particular window by hovering over a group and swiping; the group zooms out to show all the app’s windows. It’s a quick and easy way to switch apps. Use Exposé in the Dock, too, which activates Exposé when you double-tap with two fingers on an application’s dock icon. It’s a great way to switch between windows — especially buried ones — in a single application. 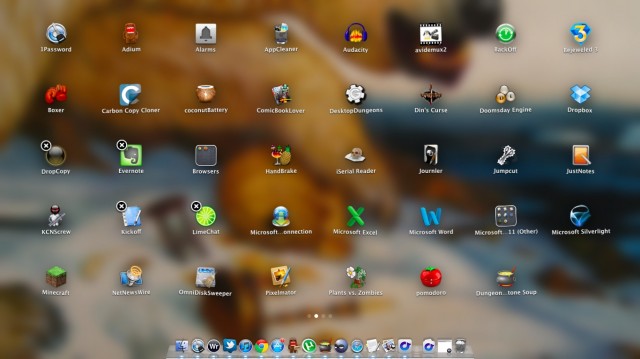 Along with the Mac App Store, Launchpad is Apple’s big push into bringing iOS’s app ecosystem to OS X. Unlike the Mac App Store, however, Launchpad will prove largely superfluous for power users: it seems solely designed to give Mac users who have newly migrated to the platform from an iPhone or iPad an app-filled home screen to look at.

If you’ve used any iOS device, you know how Launchpad looks. Hit the Launchpad icon in the dock — think of it as your Mac’s “Home” button — and Launchpad places all of your Mac’s apps on an invisible grid overlaid over a blurred version of your desktop. Just like in iOS, apps can be dragged on top of other apps to create folders. Hold down on an app and you trigger the familiar app deletion mechanism of iOS. Swipe left or right to navigate to different home screens. When the Mac App Store is downloading an app for you, it even shows as “Installing,” just like when you’re downloading and installing an iPad or iPhone app.

The problem with Launchpad is two-fold. For one thing, it’s not consistent, and that’s because it’s essentially just a GUI shell plopped on top of Finder’s Applications folder. Any apps that haven’t been deleted through the Mac App Store, for example, can’t be deleted within Launchpad: you have to find them in Applications and drag them to the trash. Counterintuitively, though, while Launchpad is largely just taking apps from “Applications” and displaying them in an iOS-like context, many of the changes you make in Launchpad — such as moving apps to folders — don’t carry over to Applications.

Launchpad will be useful for Mac newbies who are new to their laptop or desktop and came to the platform from iOS, but even these users will rapidly outgrow the feature. If you have more than a handful of apps installed on your machine, and haven’t bought them all from the Mac App Store, you’re just not going to use Launchpad on a regular basis. Finder’s Application folder is a lot more powerful, and easier to access, browse and search besides. 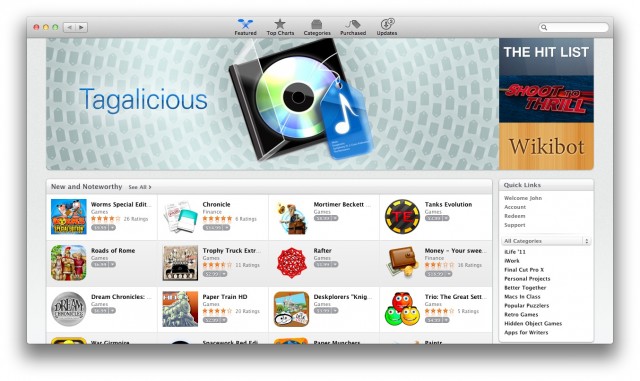 If you’re already using the Mac App Store under Snow Leopard, the Lion experience is very similar. There has, however, been one small change to the way apps are installed that is very welcome.

When you install an app through the MAS under Snow Leopard, it always installs in the Dock. If you’re a Mac user who prefers to keep your Dock minimalist, it was obnoxious to have every stray app auto-install in the dock.

The Mac App Store under Lion changes things. Now, apps aren’t placed automatically in the Dock. They are installed in both the Applications folder and automatically installed under Launchpad. It’s a better solution that guarantees that Mac neophytes can find their most freshly installed apps without delving into Finder, but without having a million once or twice launched apps cluttering up their Dock.

Overall, we love the Mac App Store, in both Snow Leopard and Lion. It’s just hugely convenient to have a central app depository, to have all of our purchased apps available for easy installation or update on any machine tied to our Apple ID. We are slightly worried about a future in which Apple might dictate that all app distribution on the Mac platform go through the Mac App Store, but that’s not happened in Lion, nor is it easy to see how it could without some much deeper level Mac App Store integration with OS X on a system-level basis.

If Lion is, as some suspect, the last version of OS X, though, we imagine the Mac App Store will be one of the huge pillars of whatever the next version of the Mac operating system ends up being called. Apple’s going to eventually want to monetize and control all of the software being run on Macs, just as they already do on iOS. For now, though, the Mac App Store is just a nice perk of using a Mac. 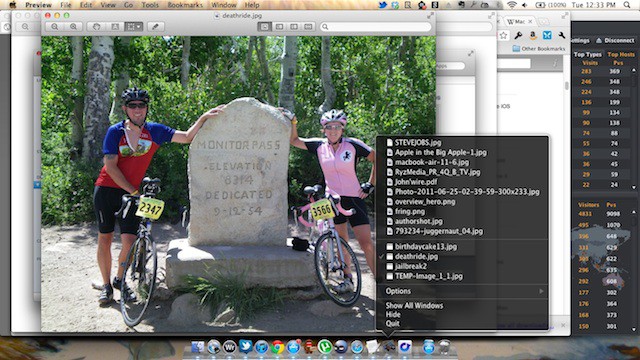 OS X Lion’s Resume functionality is another aspect of Apple’s push to make apps behave more like their iOS counterparts. Apps that use Apple’s Resume API call will now open up in the exact state at which they last closed: all of your open windows will be restored, and you’ll even be scrolled down and have your cursor placed in the same location you left it.

To us, this feels like something of a misstep in Lion. In iOS, Resume is important because there’s no true multitasking going on. When you navigate from one app to another, iOS closes the first app and loads up the second app. Resume isn’t used to restore an app that a user chooses to close under iOS: rather, it’s used to simulate desktop multitasking, and allow users to easily switch between apps without losing any progress.

In Lion, you don’t close an app to open another one. You close an app because you’re done with your work in it. So when an app loads up the same way you closed it next time you open it, it can be the opposite of what you want, which is a blank slate.

In a program like Safari, resuming to previous state after an app close makes a lot of sense: you can see all the tabs and web pages you had open last time at a glance. Resume in an app like Preview, though, can be a bit of a mess: unless you remember to close each and every document you open in Preview, those old documents will pop open in the background every time you try to preview something new. That can lead to several dozen old Preview windows popping up every time you open the app, slowing down your machine. (That Preview has no “Close All Other Windows”) ability makes the problem even worse).

Resume’s nice to have as a developer option, but it seems like it’s being applied rather haphazardly right now, under the idea that it’s best if all apps resume once they are closed. We often close apps as a way of shaking the Etch-A-Sketch, though, which is something Apple doesn’t seem to have taken into account as they extended the iOS metaphor to the Mac. Developers will have to be careful about how they implement this functionality into their apps, because Resume is not a no-brainer win for every piece of software. 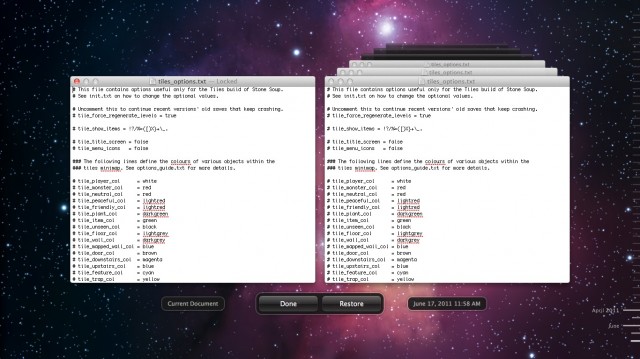 It’s strange, but Auto Save initially takes some getting used to. Instead of saving your work as you go, Lion now takes care of it. That means that your Command-S reflex is now redundant. It also means the “Save As…” has now become “Export” in many applications. So instead of saving a PDF as a JPEG in Preview, for example, you have to now “Export” it. We’re still getting used to this change. Saving is so central to the Mac OS experience, it’s deeply ingrained in muscle memory.

What we will say is that the concept of “Auto Save” is almost a misnomer. You do still have to save documents manually, and that’s right after they are first created or before you close the window of the application that you created the document in for the first time. After that, Lion will automatically track all of the changes through Lion’s Versioning system.

Versioning is totally rad, though. Think of it as Time Machine for an individual file’s changes. You can see the entire lifetime of that file, from the first word of your novel being written back in January to the edits you made in the third draft two weeks ago. All you do is select “Revert to Saved” from the File menu. Your current copy will be on the left, your past version on the right. You can check out changes between the two copies, copy and paste from one to another, or even revert entirely.

What Apple has done with Lion’s Auto Save and Versioning system is not get rid of manual saving, but make sure the end user has to do it only once. Save a single copy of a document and Lion will keep its eye on anything happening inside of it until you delete the file from the disc. It’s awesomely powerful and just as awesomely reassuring. As they say, “it just works.” 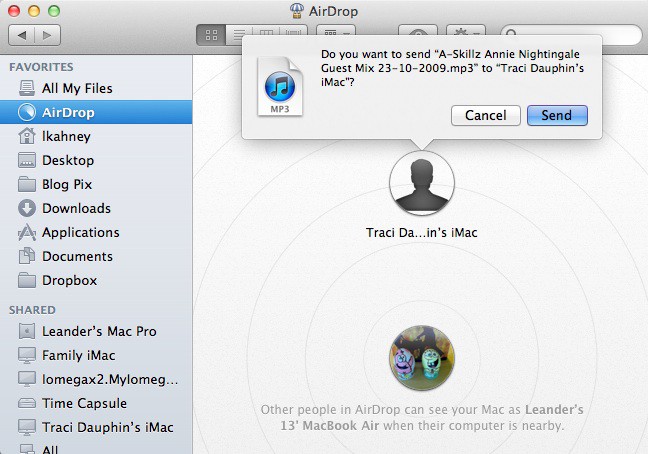 AirDrop is awesome. It lets you set up a quick file-sharing wireless sneaker net with machines within about 30 feet. In the past, we’ve done all kinds of crazy things to transfer files from one machine to another: emailing, swapping thumb drives, uploading files to the cloud. AirDrop makes it dead easy to share files with nearby computers, and you don’t even have to be connected to Wi-Fi. It detects other AirDrop-enabled computers (running Lion, natch), and lets you drop files to their Downloads folder. Recipients must accept the files, and the entire transaction is firewalled and encrypted for security. As well as sharing in the field, it’s a dead easy way to shuffle files around the home or office.

Along with Mission Control, Auto Save and Versioning, AirDrop is another huge win for Lion. For some frequent file sharers, it’s probably worth $29 in and of itself.