20 years ago today, on June 23, 1991, the first Sonic game hit the shelves and the loveable little blue hedgehog that would become Sega’s flagship character was born — ready to do battle with Nintendo’s Mario.

Today, Sonic & Sega All-Stars Racing is available on the App Store for iPhone and iPad, over a year after the game first hit consoles. But it was well worth the wait!

While there’s already a plethora of racing simulators in the App Store, such as Real Racing, GT Racing, and a collection of Need for Speed titles, there aren’t that many arcade kart racing games. Sure, you’ve got Shrek Kart and Crash Bandicoot Nitro Kart, but they’ve all been around for some time now, and we’ve been begging for something new.

Fans of the console release, and indeed those that enjoy the legendary Super Mario Kart, are guaranteed a great time with Sega’s latest App Store release. Priced at $1.99 for a limited time, Sonic & Sega All-Stars Racing brings together your favorite Sega characters to battle it out in an adrenaline-fuelled race to the finish line. 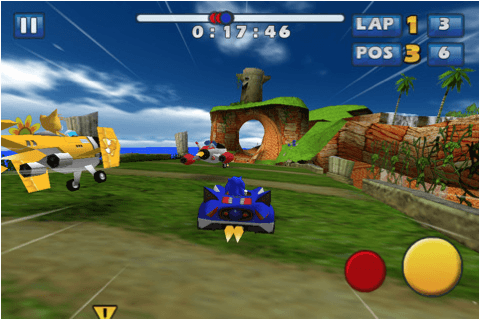 10 iconic Sega stars are featured in the game, including (of course) Sonic, Tails, Dr. Eggman, Ryo Hazuki and Amigo — all of which have their own unique vehicle. There are 15 white-knuckle courses to enjoy, which are litters with traps, speed boosts, and a variety of weapons.

With 25 missions to beat, time trials, a grand prix competition with three difficulty levels, and multiplayer with up to three other friends over Bluetooth and Wi-Fi, there’s countless hours of fun to be had.

Grab Sonic & Sega All-Stars Racing for $1.99 now before it goes up to $4.99 on June 25. It’s a universal application so you only need to make one purchase for all of your iOS devices.