I take a lot of the things for granted on my iPhone, since I’ve been using one since the original was released back in 2007. Apple released the iPhone, which many call the iPhone 2G, along with an Apple branded Bluetooth headset. That headset didn’t last very long and it was ultimately abandoned by Apple and replaced by third-party alternatives.

Therefore, although Apple abandoned the headset market iOS retained the support that Apple baked into each Bluetooth headset they made. That support allows my iPhone 4 to display the mysterious symbol that a fair number of readers comment about on my posts. So what is it? 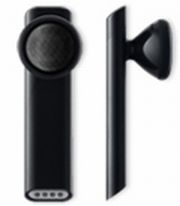 The symbol that some of you (see comments) find so mysterious is shaped like Apple’s Bluetooth headset and it indicates the battery level of the Jawbone headset that I use with my iPhone 4.  Apple includes support in iOS to monitor the battery life of Bluetooth headsets that support this option.

I don’t have a comprehensive list of headsets that support this option. So if you are interested in using this feature on your iPhone I suggest you check with the manufacturer of any headset you are considering. They will be able to tell you whether or not their product supports the Bluetooth battery level indicator before you purchase it.

In the meantime if you have a Bluetooth headset that supports this iOS feature kindly share that information with everyone by leaving a comment about it.